Adam Neumann can be a great CEO, but he needs the right team around him

Should Adam Neumann be trusted with more VC funding? Yes, but only with a well-balanced executive team.

The recent news that Adam Neumann, the controversial WeWork founder, has secured bumper venture capital funding for a new venture, has divided opinion. On one side are those who believe that his management - or mismanagement - of the coworking giant should preclude him from ever being trusted with so much money and power again. Then there are those, including his new investor Andreessen Horowitz (a16z), that believe he is still one of the most promising founders and business builders out there, who should be given another chance.

From a people analytics standpoint, I am leaning toward the second camp. Looking at it objectively, Neumann fulfills many of the criteria that investors look for when backing new businesses. Firstly, he is a repeat founder, who has shown he has the grit and determination to build a business. Experienced founders are in demand amongst VCs, widely considered a safer bet than first-time entrepreneurs. As Marc Andreessen wrote in his blog: "We love seeing repeat-founders build on past successes by growing from lessons learned."

Every great entrepreneur has at least one and probably numerous failures behind them. Admittedly, most don’t fail on such an epic and public scale as Neumann but making mistakes and learning from them is very much part of the journey to entrepreneurial success. Startups talk about 'failing up', and in our analytics models, both positive and negative experiences are considered useful for preparing leaders for future roles.

Despite the eventual implosion of WeWork, Neumann has shown that he can build a lot of value; let’s not forget the company is still worth around $5bn. And in the process, he has developed a variety of sought-after skills and knowledge that he can bring to a new role. In terms of functional competency, our model would place him as a credible, strong CEO and the fact that his new venture, Flow, is also in the property space means he also has extensive domain experience to draw on.

However, there are undoubtedly lessons to be learned from Neumann’s leadership of WeWork, about the danger of putting too much trust and power in the hands of a highly charismatic CEO. While the issues at the coworking company have been widely pinned on Neumann, our analysis consistently shows that delivering scalable, sustainable value comes down to the whole leadership team, rather than one individual. The key question about WeWork is whether the team around Neumann was balanced in the right way to support his leadership style and behaviours.

Neumann is famous for his charm and confidence. One VC, quoted in the New Yorker called him “the right kind of crazy” and “the most charismatic pitchman I ever saw.” Our behavioural projection, based on our PACE tool, suggests he has many of the key traits that investors look for in founders, including grit and resilience, and high curiosity, which comes along with a high tolerance of ambiguity, divergent thinking, intuition, and disruption.

But alongside these positive traits, investors would also need to consider the behavioural amplifiers that could negatively impact personal relationships, including the dark triad of psychopathy, Machiavellianism, and narcissism. I would imagine that Neumann’s self-monitoring behaviours are also low, suggesting that he doesn’t tend to readily change his behaviour according to the audience. An understanding of these different factors at play would enable investors to surround him with personalities that complement and moderate his potentially toxic traits.

Building a board with functional balance is also vital, to avoid a repeat of the issues at WeWork. An analysis of the company’s board in 2014 shows a strong functional balance, however that started to change when Neumann secured voting control over the board the same year. So began a period of higher leadership attrition, with Neumann appointing friends and close confidantes, rather the most suitable person for the job. It was at this point that his wife became Chief Brand and Impact Officer, despite having no prior leadership experience.

As a result, by 2019, the year of the attempted IPO, the functional balance chart highlights numerous problems. Interestingly, there is a clear concentration in the governance function, indicating a perceived need to focus on governance. However, the lack of a COO or CTO should have rung massive alarm bells for a business that was seeking to scale rapidly through the delivery of premises and technology. The result is an unsustainable and operationally ineffective board, that clearly isn’t focused on the value creation priorities within the business. 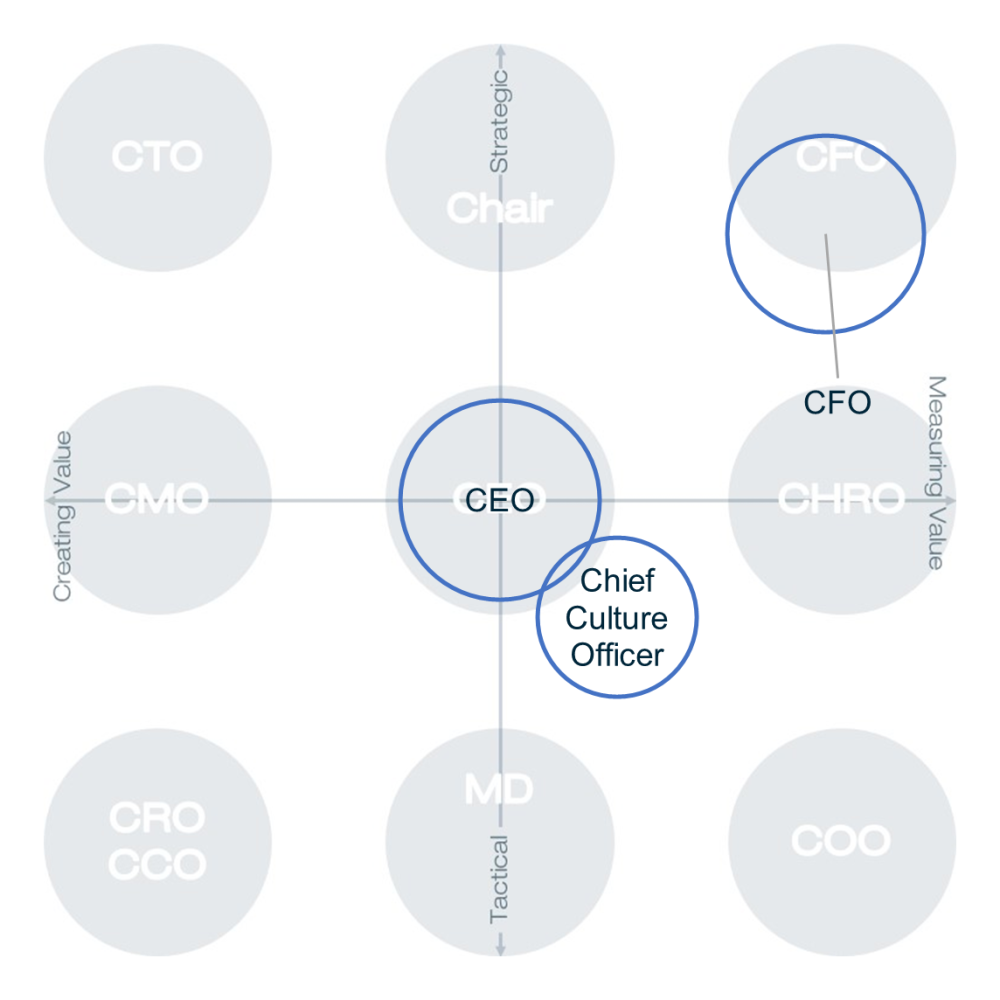 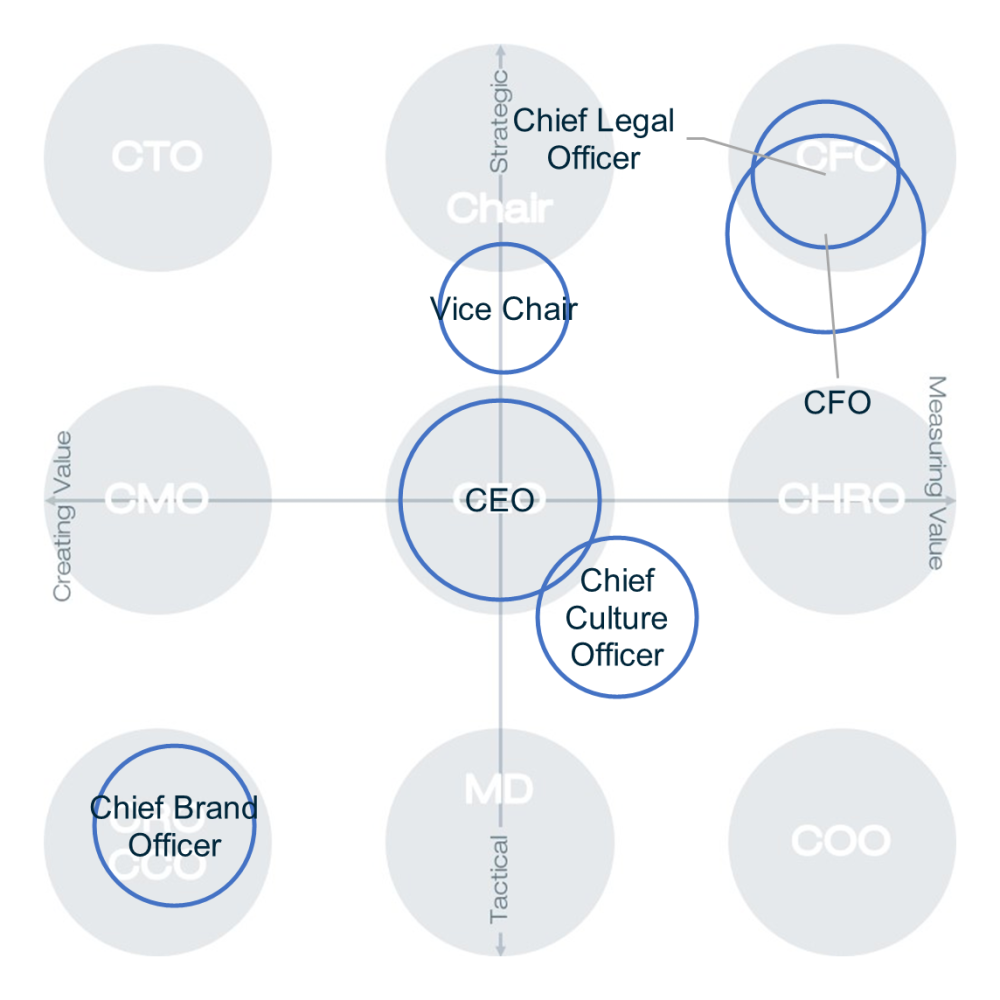 The two charts show the leadership change that happened from 2014 to 2019. In 2014, at the Series C and D fundraisings, we see good leadership balance with strong functional leadership in each of the quadrants. In 2019, at the attempted IPO, we see that the team has lost operations and technology specialists, while gaining a concentration of skills in the governance function, along with a Chief Brand officer.

Has Adam Neumann learned from his past mistakes, and can he be trusted not to repeat them? Only time will tell. The equally important question is whether a16z has itself taken on board the lessons of what happened with WeWork and understands that it too has a part to play in keeping the maverick founder in check.

In recent years, high-profile, ‘celebrity’ founders have taken on a kind of mythical status, feted by investors, and built up in the media. But, at the end of the day, they are only human, with significant strengths as well as weaknesses. By taking the time to understand the full picture, with the help of people analytics, investors can ensure that both sides of the equation are accounted for.